Gates, it turns out, was something of an e-book pioneer. Sort of. Maybe. It first appeared as a traditional dead-tree Doubleday hardcover in January 1993. But later that year, as the covers reveal, an electronic edition of the book appeared as a “Turbo Book” from an outfit called Allegro New Media. The entire thing, text and photos, fit onto two floppy disks. 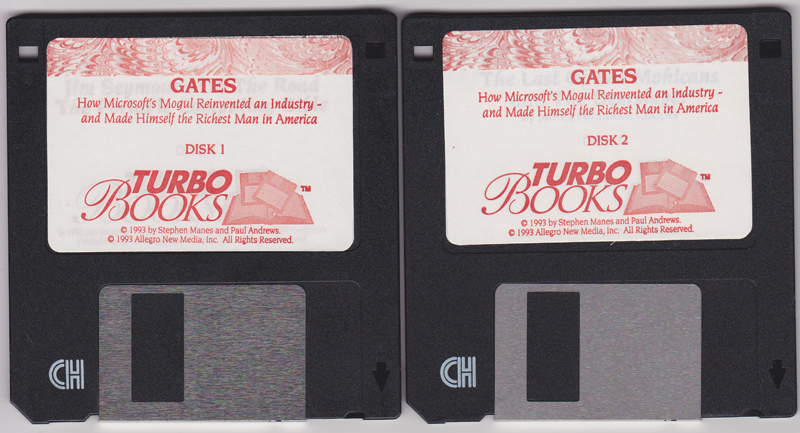 And at the time, we thought it was kind of lame. 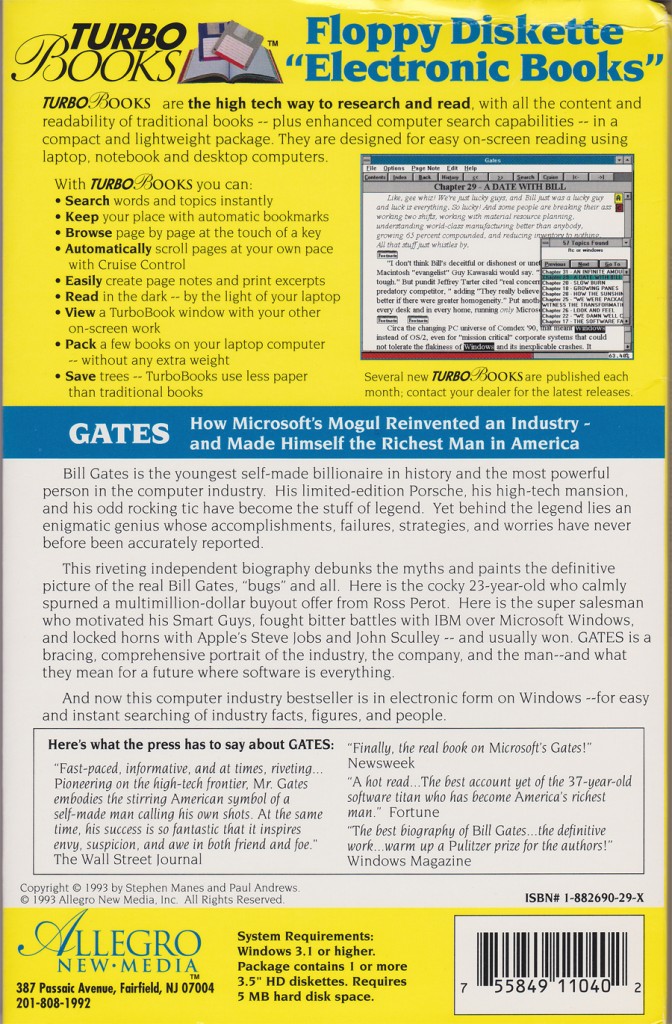 But that was largely because of the hardware that could run it at the time. Most notebook machines weighed more than seven pounds, included a grainy 640-by-480 pixel screen (about 2/3 as many pixels as a monochrome Kindle, spread out over a bigger area), and had batteries that rarely lasted three hours on a charge. That did not make for a reading device you’d want to snuggle up with in bed even if, as the promo copy notes, you could “read in the dark—by the light of your computer.”

Still, the cover flap below shows how many features of modern e-books Allegro’s Turbo format included. Bookmarks? A location bar to show you how far you’ve read? The ability to search the entire volume or jump to any location? Check, check, and double-check. 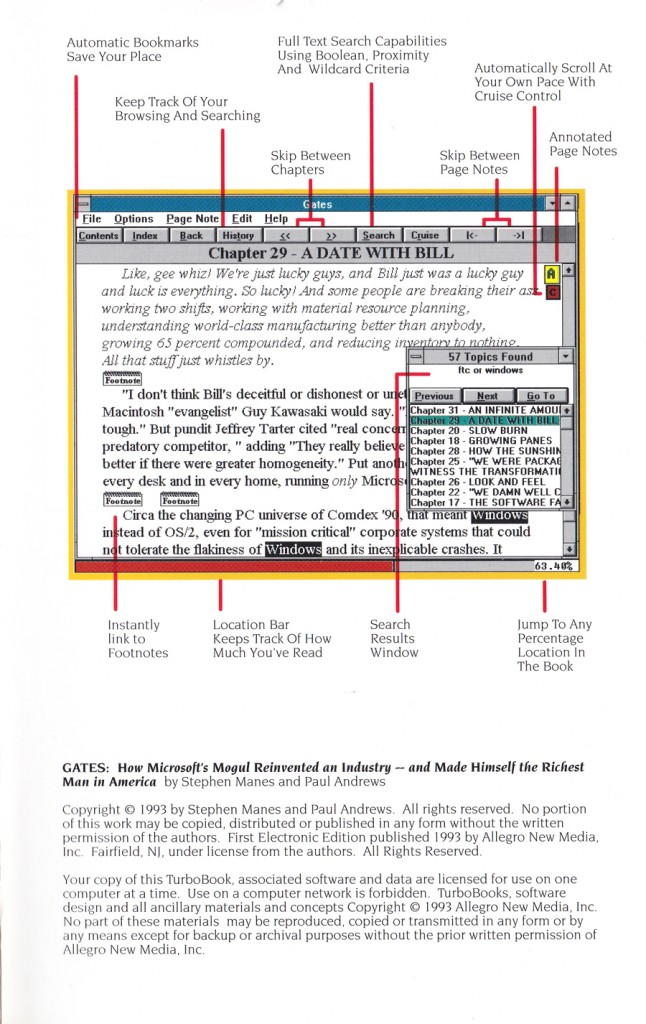 As that cover flap indicates, the search feature was a bit quirky, presenting results in an oddly jumbled list, chapter 18 following chapter 20. But the footnoting function was stellar, opening a separate note window right on the screen rather than forcing you to jump to the note and back again: 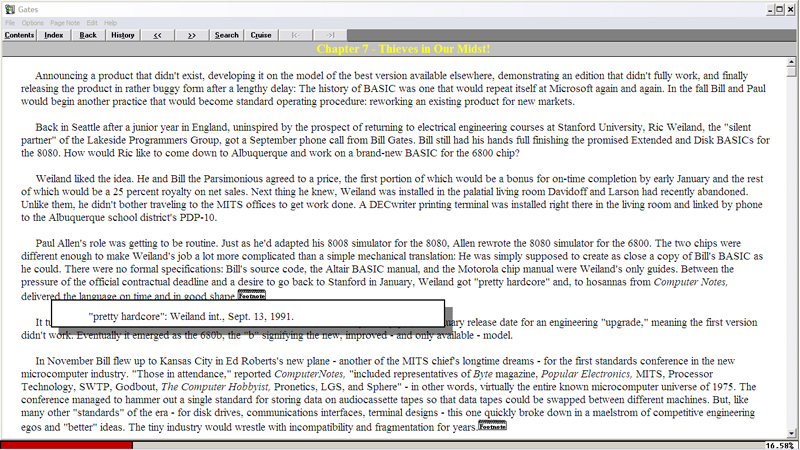 The bookmarking function brilliantly kept track of your jumps around the text in a history list that resembled the search box, but only, alas, until you closed down the program. The Turbo Books software even included a “cruise control” that would execute a page-down command at a preselected interval to make reading hands-free. And it had something very few programs in that pre-Web era ever bothered even to consider: a Back button. But it evidently couldn’t handle artwork in line with the text, and the photos appeared in their own chapter in low resolution appropriate to the lame screens they’d be displayed on: 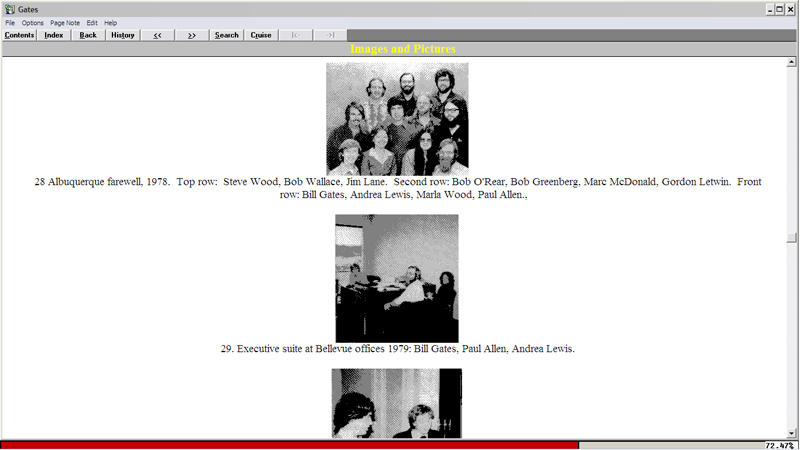 And that low-res screen situation was probably the reason the fonts could not be resized.

Amazingly, although the book would not install on a recent 64-bit Windows 7 machine, it did fine on a 2007-vintage Windows XP 32-bit model, which is where we got the wide screen grabs above.

As far as we can tell, Turbo Books didn’t last long. We’re not entirely sure that Gates even made it out to the market, since we’ve found no mention of it in Google searches that turned up several computer-related Turbo titles, a James Fenimore Cooper Last of the Mohicans/Deerslayer combo, and James B. Stewart’s insider-trading opus Den of Thieves. We received a modest advance for the rights, but not so much as a nickel in subsequent royalties. So the floppies we own may well be the only ones that ever existed.